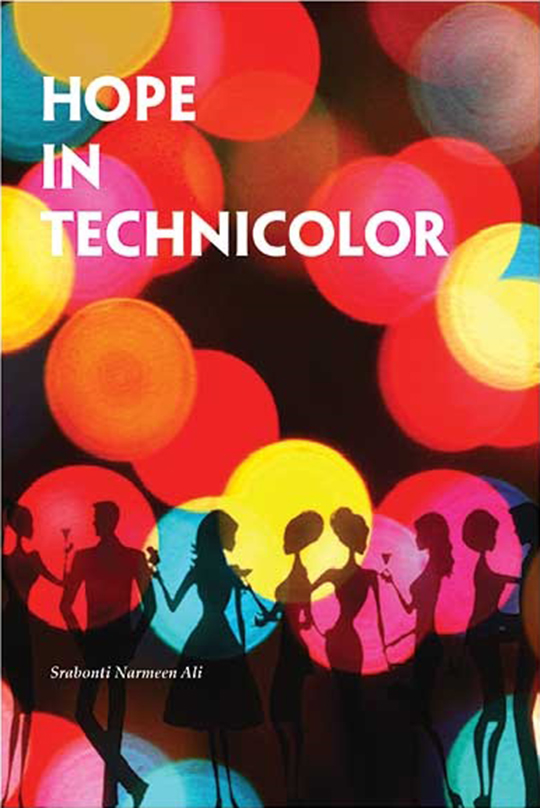 Hope in Technicolor by Srabantee Narmeen Ali is a tale of group of friends in their twenties. Love, betrayal, sex, drugs, check in to new fashion houses or watching sports seem to be their only meaning in life. While events after events reveal the way curtains rise in theatre to expose the characters, the readers see the glimpse of inner depth in each of the characters.

Ali’s book weaves the story of Alia and her friends Abid, Naeem, Arnaz, Farah and Sarita. All was going well with their own tension of who loves whom, who makes out with whom till they find a girl they knew dead in the street. It turns out that the father of one of these young people is involved in raping and killing the young girl. This catastrophe changes them into more responsible and mature being or rather their inner maturity which each of them was hiding to be “cool” comes out. One friend commits suicide, when one who is always nasty with others reveal how she was raped in childhood and had to give away the baby in a foreign land whose birthday she still observes. One friend tries to overcome the horror of memory of his mother’s death and yet support the other friends suppressing his own sorrows.

Samhita Arni, the author of Sita’s Ramayana, observes correctly that this debut novel by Ali “delves beneath the razzle-dazzle of select parties and exclusive clubs of the beau-monde in Dhaka to reveal a darker, more disturbing side of an elite life”. Ali explores the poignantly struggles of elite class in her book. However, she does not brood on tragedy and shows colorful hopes and a silver lining in spite of all the suffering and thus voice out a message to young generation to hope for the best.

At first glance Aliya Khan and her friends Abid, Naeem, Arnaz, Farah and Sarita seem to lead a charmed life. In contrast to the extreme poverty that plagues Bangladesh’s population, the elite society that Aliya grew up in seem more concerned about throwing parties in their lavish marble palaces and driving around in expensive cars rather than anything else. In fact, all Aliya wants is for her boyfriend Abid to get over his issues and marry her. However everything is suddenly turned upside down when a girl they know is found murdered on the streets. It comes out in the papers that Naeem’s father is responsible for the murder. The saying that everything is connected and everyone is related in Dhaka city rings truer than ever, and Aliya soon realizes how one seemingly irrelevant event can cause a domino effect that trickles down and exposes long forgotten secrets and dark family pasts. Overnight, the playful boys and girls she grew up with, painfully transforminto men and women haunted by a city that neither forgives nor forgets.