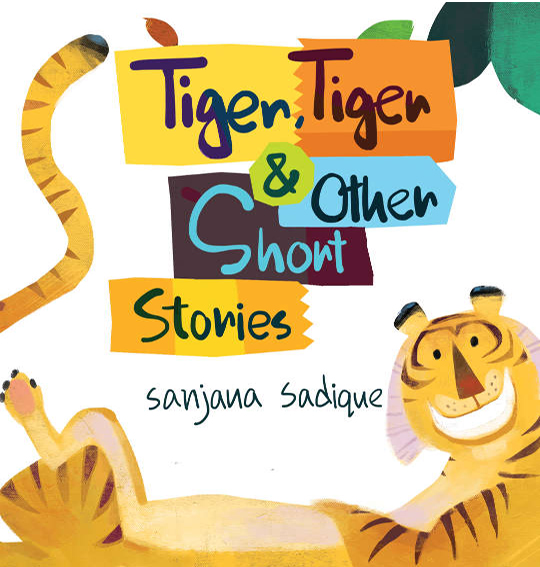 Tiger, Tiger and Other Short Stories

Tiger, Tiger and Other Short Stories by Sanjana Sadique is an educational children’s book. This book teaches children to be nice with animal and fellow children in a very simple yet strong way. Sanjana Sadique after completing her college and university in London went through some workshops on writing stories for children. This is her debut book published in 2014 and already a favorite among children.

There are five stories in this book. The first story “Tiger, Tiger” is about a little boy called Arsh who tries to save the tigers of Sundarban. When an angry mobs tries to kill a tiger Arsh stands up for the tiger and reasons with the mob that the people have destroyed tiger’s home by destroying Sundarban. The mob listens to him and feels guilty and thus leaves the tiger alone.

The second story “A Lesson Learnt” is about a little girl who has captivated a wild owl. However, Anupama realizes her mistake when she finds that the owl is hurt. Champa, her friend who was protesting against captivating the wild animal from beginning, helps Anupama to release the owl to the woods.

The third story “Can Slim Swim?” is a story of a baby crocodile that is afraid to swim. But later he overcomes his fear and learns to swim. Not only that he learns but he also teaches his brothers also how to swim.

The fourth story “Only Hope” is the story of gratitude and love between humans and dogs. A little girl called Sarah saves a dog in a rainy day. She did not know the owners is dead. The owner’s grandfather comes to visit Sarah and as a token of remembrance of his granddaughter, he gifts both the dogs to Sarah.

The fifth story “Friend or Foe” is a nice little story about friendship when a young boy and his class stand up against a bully.

All the stories in the book have some morals and yet is not heavy but full of magic and happiness. A just book to gift to one loved little one.